Australia’s health report card landed last week, but so did something else. A new app could potentially hold the key to Australia’s physical inactivity dilemma.

Pokemon GO is currently the number one most downloaded and arguably the most talked about smart device app on social media right now, and according to online analysing company SimilarWeb, the app is outperforming popular app download Tinder, while rapidly catching Twitter for app usage amoung Android users. Released in Australia last Wednesday, the motion-based game utilises a smartphone’s GPS and camera to bring about the augmented-reality gameplay that puts your avatar on the quest to catch monsters, collectively called Pokemon.

Based on the original game from the 90’s, Pokemon GO developed by Niantic, Inc. has already raised safety concerns with the potential for user-complacency, resulting in injury as a result of real-world hazards.

Apart from the hype and nostalgia in the media, there is another obscure phenomenon that is beginning to surface. The reality is, users of the app are changing their physical activity behaviours, with users taking to social media describing the after effects of prolonged physical activity (e.g. delayed onset muscle soreness), and others finding the game an outlet toward improved mental health. App players who identified as sedentary or inactive prior to downloading the app may now find themselves walking the long way home as some users report walking more frequently and for longer periods as a result of the game. 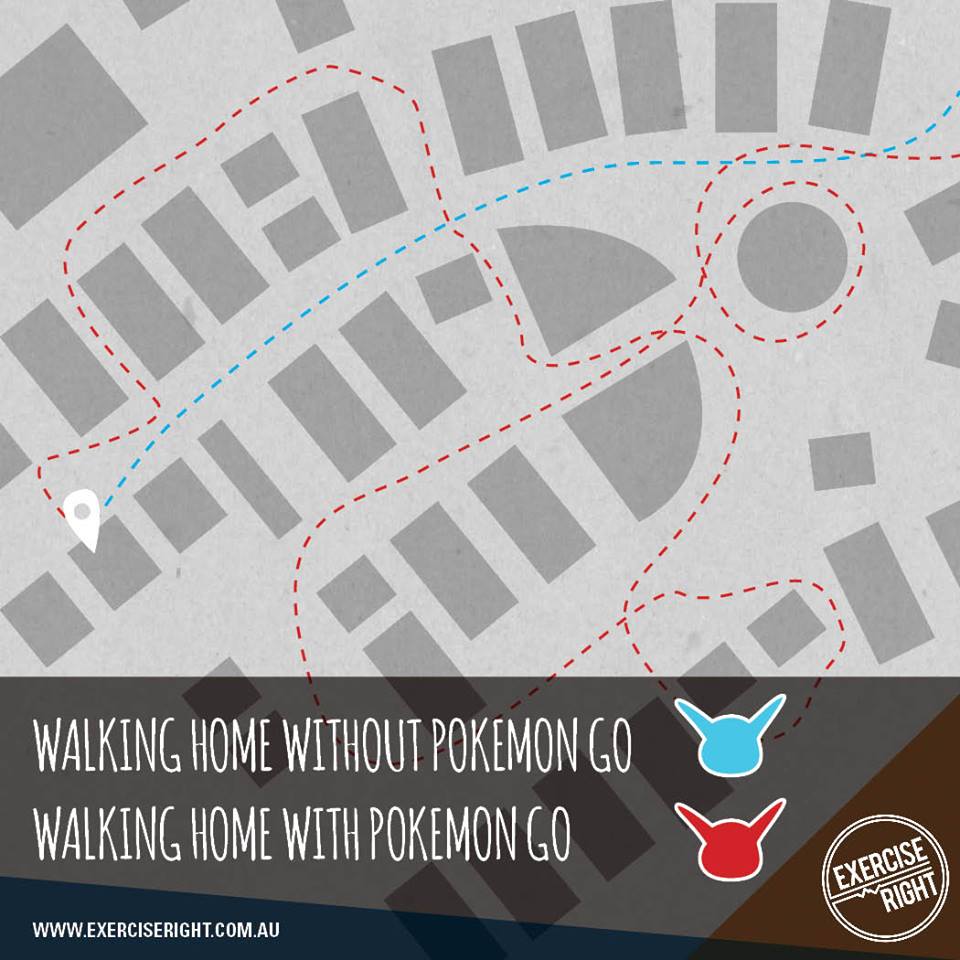 Last week the Australian Health Policy Collaboration issued its’ report on Australia’s current health as part of its’ progress towards improved global health by 2025. Amoung the list of factors contributing to chronic disease, Australia’s obesity rate has increased, with 27.9% of the population now classified as obese, and 44.5% of Australians now classified as physically inactive (e.g. not meeting the Australian Physical Activity Guidelines of approximately 30 minutes of moderate-intensity PA on 5 or more days per week). Lack of physical activity is known to increase the risk for ischaemic heart disease, type 2 diabetes, stroke, and some cancers. Long term, cost-effective physical activity interventions are needed, and Pokemon GO may offer ideas that could potentially aid the improvement of widespread physical activity participation.

Pokemon GO players are required to move around via displacing their position (aka their avatar) on the real world map via walking or other means (e.g. bike, public transport). To progress in the game, the user pursues the end goal of successfully catching an estimated 151 different Pokemon by exploring various geographical locations. These locations can range from nearby neighbourhood parks and shopping centres to major tourist attractions, such as the Sydney Opera House. Players are required to walk to numerous locations on the map where they can receive rewards. Players can collect virtual items at ‘PokeStops’, hatch eggs containing new Pokemon by walking certain distances (usually between 2km and 10km), as well as increase the likelihood of discovering new Pokemon depending on the amount of time spent searching. Put simply, it gets players moving!

If like me, you were to walk down to Circular Quay last Sunday, you would have found hundreds of Pokemon GOer’s participating in an organised social media event called the ‘Pokemon GOer’s Walk’. As a current research student looking at the effects of pedometer- and accelerometer- based interventions for increasing physical activity levels, it is interesting to observe the impact the app is having on the physical activity habits of players. I surveyed 62 participants at the event, which expected an attendance of hundreds across the day. Interestingly, 87% of players surveyed classified themselves as more physically active after starting the ‘Pokemon GO’ app compared to before the app where users classified themselves as leading a mostly sedentary lifestyle, reporting on average 4-6 hours per day and up to 10 hours per day spent sitting, on weekdays and weekends respectively.

Part of the app works by keeping a record of the distance covered by the user while the app is open, and stopping while the app is closed. This function also stops operating when the smart device detects speeds above running speed, which is reported by players to be around 30km per hour. The function limits a player’s attempt at deception, which may include driving in order to further game-progress.

Changing from a sedentary lifestyle to a more physically active one is difficult for many individuals’. Nearly 70% of players surveyed reported walking an average distance of 4.7 kilometres per day (approximately 6200 steps) with the app open alone. Players who reported measures from their smartphone’s step count record showed an average increase of 5553 steps per day since commencing the game.

It is not uncommon that technology-based interventions are used to promote physical activity. A review on the role of ‘Exergaming’, the combination of physical activity and gaming, found that active gaming interventions using systems such as Nintendo Wii and Xbox Kinect have been shown to increase energy expenditure up to 300% above resting levels. Popular fitness tracking devices and mobile apps such as Fitbit and MyFitnessPal use behavior change techniques to help increase physical activity levels, with some interventions proving effective. However, despite this positive news, it appears that the effectiveness and popularity of technological devices have made no significant progress to reduce Australia’s recent obesity rates and physical inactivity findings.

Many of us identify ‘lack of time’ is an obstacle for participating in regular physical activity. When Pokemon GO’ players who identified as working full-time were asked how they find time to play the app during a weekday, most players responded that time for gameplay becomes a priority and that planning time is important. Strategies to incorporate gameplay include; walking outside the office during lunch breaks, 1-2 hour ‘after work walks’, or changing to more active modes of transport (e.g. walking and public transport).

Overall, participants reported the sense of nostalgia, reward, and competitive experience offered by Pokemon GO as the driving force behind why players find themselves more physically active. Maybe we need to consider more appealing interventions to promote physical activity, particularly those combining popular culture and motivational strategies. If Pokemon GO can prove as popular over the long term as it currently is, then the functions of the game may offer a novel contribution toward large-scale, long-term physical activity intervention success.

Shaun is an Accredited Exercise Physiologist (AEP) and currently studying a Masters of Public Health (Research) at UNSW, Australia. Shaun’s area of research involves self-regulation and physical activity, as well as pedometer- and accelerometer- based interventions for increasing physical activity levels amoung low socioeconomic populations. Shaun is also an AEP at NeuroMoves – Spinal Cord Injuries Australia, working with clients with neurological conditions.